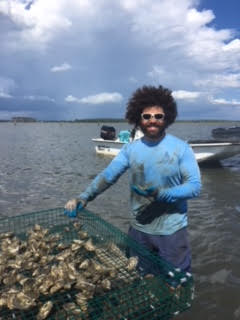 Ryan Bethea had never really thought about oyster mariculture until he stumbled across an article in a magazine at his parents’ house.

“It all of a sudden hit home for me,” he said. “I’ve always been a real pro-North Carolina kind of person, really into the environment, and it hit me like a ton of bricks–this could be your way to make a difference for our state, environmentally and for the people of our state.”

So Bethea, who owns and operates Oysters Carolina in Harkers Island, got another degree and did some post-graduate work at the Virginia Institute of Marine Science in oyster genetics.

He then worked with Jimmy Morris of Millpoint Aquaculture, which is the only oyster hatchery in North Carolina. Bethea purchased his lease from Morris and started his operation in early 2015.

“My business model is a little bit different,” Bethea said. “I’m in it for the long haul, and I’m working more on building reputation than making money from it.”

Bethea used to teach middle school in Durham and operate his lease, but now he works on his oysters full-time. His is a small-to-medium farm with 300,000 oysters in the water, and he said that’s the most he’ll ever have because he wants to be able to do everything himself. Bethea’s heard his oysters described as the saltiest people have ever had, which is due to the location of the lease. The salinity is 31-33 ppt, and Bethea harvests his oysters the day-of for events to ensure they’re at their freshest.

Owning an oyster mariculture operation is a challenging in task, in part because of the nature of the work. On the day Bethea was interviewed, the sound had frozen over, and he’d kayaked through the ice to check on his oysters. He usually checks on his oysters with his kayak for environmental reasons. Bethea also said it can be difficult to keep oysters alive and that doing so takes a mix of science and strength, well as some luck, since some things, like weather, is outside of their control.

“They’re not fruit flies, so you can only try something once every year or once every two years,” he said.

Bethea said that since he first got involved in the industry, he has seen growth in oyster mariculture and that he sees a lot more North Carolina oysters available in restaurants than he used to. He thinks that slow, meticulous growth is important to maintain the industry and that educating the public about oysters will continue to be of utmost importance.

“We need education because many people have no idea about oysters … People just need to be educated that they’re safe, especially in our state,” Bethea said. “We grow them in sustainable ways, and they don’t even have any negative impact — and probably leave a positive footprint on the environment.”

To have you or your business profiled in a future newsletter, contact oysters@nccoast.org